return to Our Boats

Prev
Page 1 of 1
Next
Slideshow

Prev
Page 1 of 1
Next
Slideshow

The 43 Punisher has emerged from a joint effort project between Checkmate & Chief Powerboats. Checkmate was looking to expand their lineup and loyal customer base by offering a boat that could handle rough seas, hit 100mph, and still be fun and enjoyable to bring the friends, family, and grandkids along. The performance, stability, and safety of the Chief hull design made a perfect platform for their vision.

Custom tooling and molds were designed and engineered to create a cockpit and interior that is totally unique to the Checkmate brand. The helm was created and fitted based on the user's unique set of requirements and ergonomic needs. This setup yields an extra 20” of usable space for this pleasure configuration which is great for the days when the boat is filled with friends and family. The dash utilizes a combination of both analog and digital gauging. The seating and upholstery were supplied by McLeod interiors with color-matched upholstery and textiles to pair with the Mitcher T “Taking Liberty” paint theme.

The 43 Punisher is powered by twin Mercury Racing 700sci coupled to a pair of Mercury M6 drives. The engines have been fine-tuned and upgraded by Ben Wiersum at Precision Power Offshore. This power combination propels the vessel to speeds of 100mph while still being very manageable and economical to run day in and day out all season long. This combination is finished off with a custom set of Herring propellers. Keep an eye out for this wave-crushing monster at a poker run near you. The 43 Punisher brings fun and excitement to the friends and family that it carries from event to event across the east coast.

When Bill and Monica Reiffer learned that Checkmate was building the Punisher, a “one-off” 43-foot wave crusher, using Chief molds, they started following the build. Bill previously owned a 120 mph Checkmate with a #6 drive prior to the Punisher. Naturally, they were interested in this boat, so much so, that Monica ended up buying the boat for Bill!

A few months after completion, we learned that the 43 Punisher was available for purchase, so we decided to take a look. We made arrangements and met a couple of sales guys at the boat launch, neither of which were experienced boaters. It was a very windy day at the marina by Lake Michigan. Once the boat was off the lift, I took the controls in the rolling channel. Once in the lake, we soon had the Punisher cruising into the 3 to 5 ft. waves at 50+ MPH. We fell in love with the Punisher immediately on that ride! It was amazingly stable with no back-breaking pounding. We stayed completely dry, despite blasting through walls of water. We’ve done multiple poker runs since then, including Anthony Scioli’s, Erie Poker Run. On this particular run, the water was so rough that none of the other boats stayed out on the big Lake Erie water. We “flew solo” in the big water that day, and the Punisher really delivered in the rough conditions! 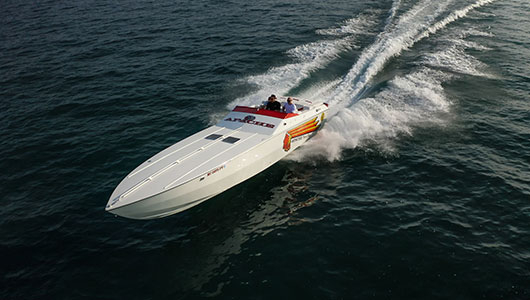 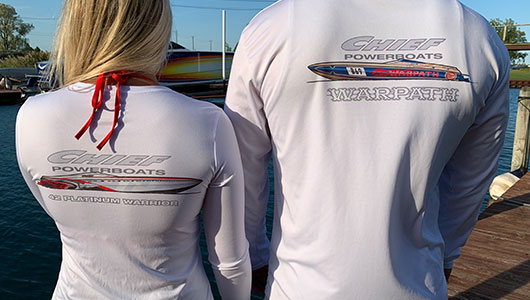 Check Out Our Merch 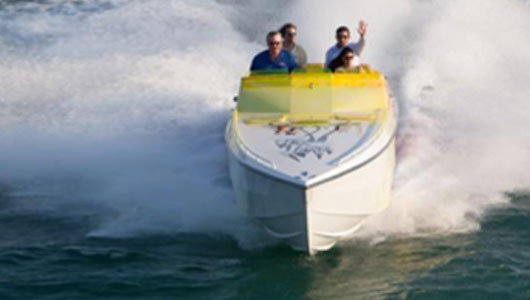